The procurement process was carried out in accordance with national and EU tender regulations in combination with the strict EU procurement requirements applied in Interreg programmes. Findings obtained during feasibility studies and lessons from a study trip to Denmark earlier in the project were also considered (see the Investment planning report). The tendering process also included the elaboration of technical specifications. General specifications for slurry tankers, spreading and acidification equipment were designed by WP3 leader Janis Kazotnieks and are available in Annex A of the Investment procurement report. Two types of acidification equipment were procured: five in-field and two in-storage. The total value of the investments is 1 185 000 € of which 795 500 € was provided for by ERDF (European Regional Development Fund) through the Interreg BSR programme. Via redusing ammonia emissions, the investments are anticipated to stop approximately 67 tons of nitrogen from entering the environment. Thereby, they reduce the use of mineral nitrogen fertilizer. The use of sulphuric acid will also reduce the need of sulphur fertilizer. 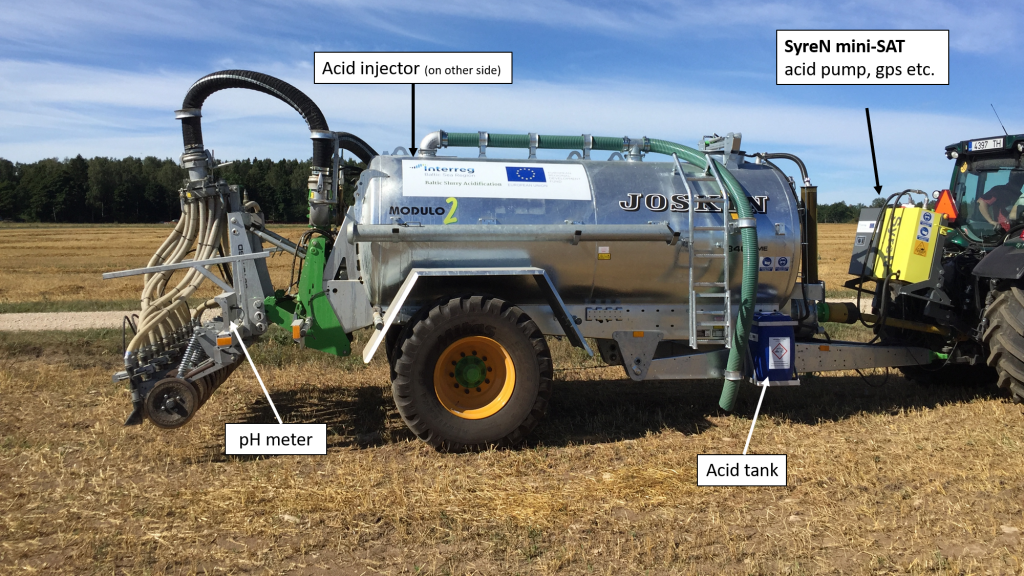 The Estonian project partner ECRI is a research institute and invested in an in-field acidification system for research purposes. The procurement process wasn’t completely problem-free, which ECRI attributes to local suppliers being inexperienced with SATs. ECRI recommends being mindful of this risk. The organization procured a Joskin 8 m3 slurry tanker from Eesti Agritehnika OÜ equipped with 3-meter open-slot disc-injector and the mini SyreN SAT system (the mini SyreN was developed by Biocover during this project specifically for testing and research institutes). The final investment cost was 123 890 € of which 105 310 € was paid for by ERDF programme funding.

SyreN in-field SAT with a tanker and 36-meter boom with trailing hoses acquired by Blunk GmbH.

The German company Blunk GmbH is an agricultural contractor and was one of the three project partners which made the SAT investment on a commercial basis. Originally, Blunk wanted to redesign the in-field system to work better under German conditions, however, only one company turned in an offer to build a modified system for €460 000. Blunk determined this was too expensive and decided to invest in a standard in-field system instead. They completed as second round tendering which resulted in their procurement of a SyreN SAT and a 30 m3 Kaweco slurry tanker with a 36-meter boom and trailing hose applicators. The equipment was delivered in July 2018 and cost 366 825 €, of which 175 000 € was provided by ERDF programme funding.

The Latvian project partner Lauku Agro is a private farm which made the investment on a commercial basis. Lauku Agro joined the project one year after its start, but still managed to conduct and finalize the procurement quickly and efficiently, beginning in July 2017 and ending with the machinery delivered at the end of September 2017. Instead of buying new equipment, Lauku Agro procured from GOMA ApS a second hand in-field SyreN SAT and a refurbished Samson PG 25 m3 slurry tanker with a 24-meter boom and trailing hose applicators. The equipment is used for spreading acidified separation liquids from pig slurry as well as digestate from biogas production. The total cost of investment was 157 000 €, of which 117 750 € was provided by ERDF programme funding. 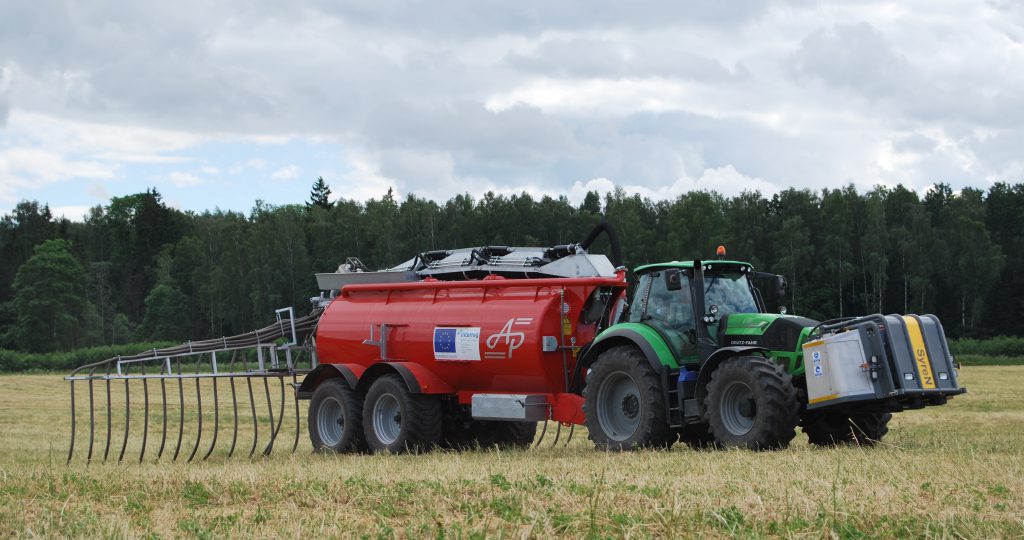 In-field SAT acquired by LUHS for their experimental farm.

The Lithuanian project partner LUHS is an academic research institute which made the investment for research purposes and for use on their experimental farm. They did an EU-wide tender for in-field SAT equipment. Initially, LUHS wanted to procure a tanker of a capacity of 24 m3 slurry tanker to be paired with the SAT, however the cost of this was over budget. A second procurement was thereafter made for an in-field SAT with a smaller 20 m3 slurry tanker with a 12-meter boom and trailing hose applicators. LUHS invested in an in-field SyreN SAT and an AP 20 m3 slurry tanker with a 12-meter boom and tailing hose applicators from UAB Biržu žemtiekimas for 184 690 € of which 157 000 € was provided by ERDF programme funding. 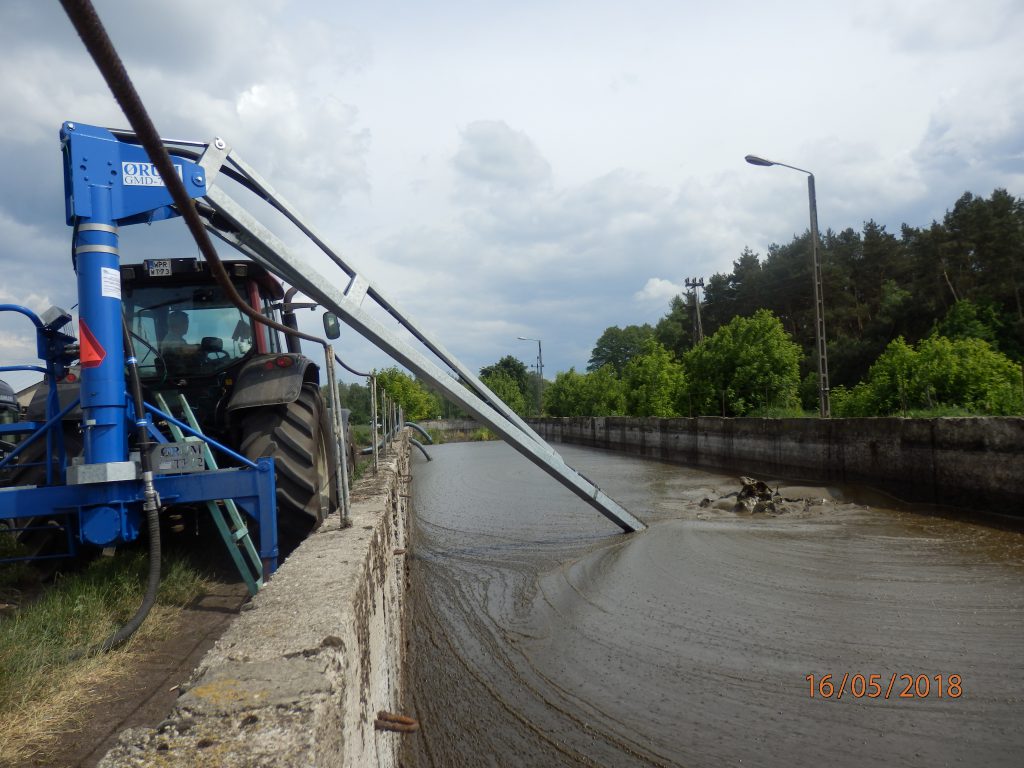 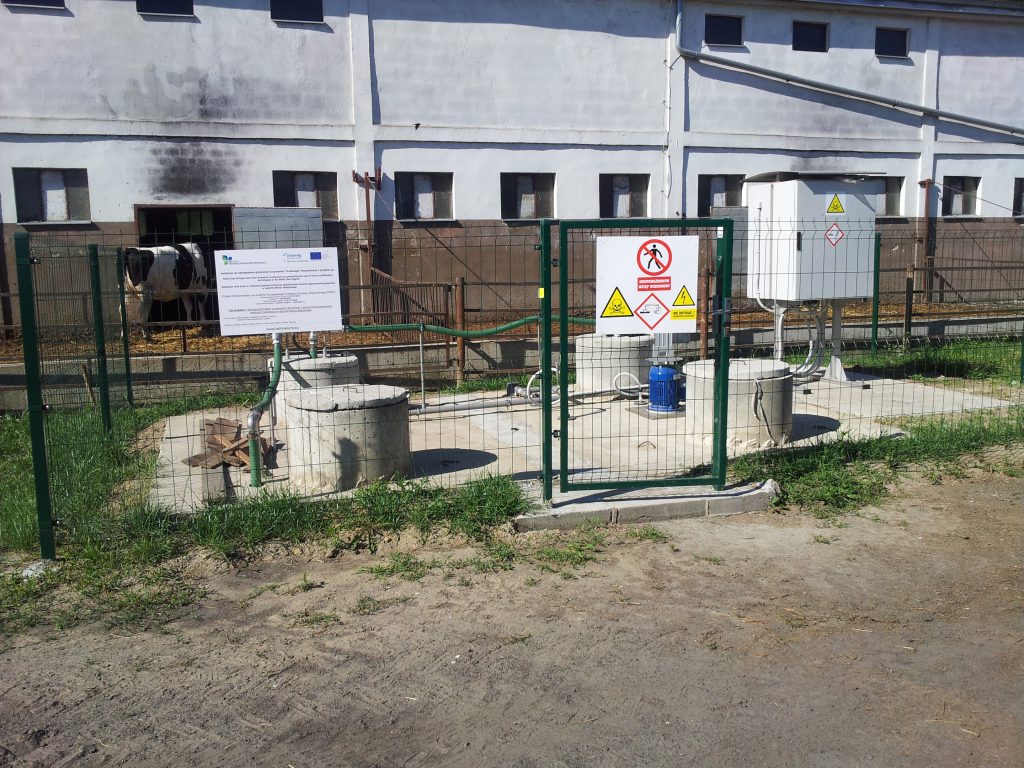 A pilot scale in-storage SAT at the ITP research farm in Falenty, Poland.

The Polish project partner ITP is a research institute and made two separate SAT investments: 1) a full sized in-storage SAT for use on their experimental farm in Biebrza, and 2) a pilot-scale in-storage SAT facility for research and demonstration purposes at their experimental farm in Falenty. Each procurement was done separately, both of which took 4–5 months. Each procurement yielded only one offer, and both were acceptable. ITP invested in a tractor powered in-storage acidification equipment from Ørum in DK for 39 000 €, and in a small scale (2 x 12,5 m3) in-storage equipment from FAPO Co for 118 000 €. The total cost of both investments was 57 000 € of which 48 000 € was provided by ERDF programme funding. 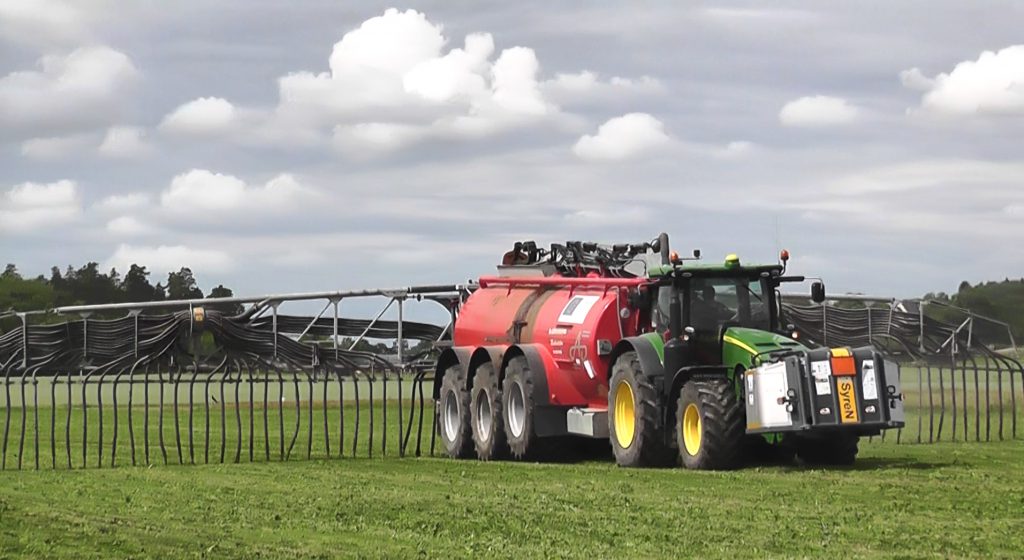 The SyreN in-field SAT investment by Br. Göranssons for commercial use in Southern Sweden.

Swedish project partner Br. Göransson is an agricultural contractor in southern Sweden and invested in an in-field SAT system on a commercial basis with the aim of providing a service for increasing slurry nitrogen use efficiency in slurry to their customers. They made the procurement directly from Danish companies in two separate steps: one for the in-field SAT and one for the slurry tanker. The in-field SAT consists of SyreN acidification system and a 28 m3 AP slurry tanker from AP Gyllevongne A/S equipped with a 24-meter boom and trailing hose applicators. The total cost of the investment was 295 550 € of which 192 345 € was provided by ERDF programme funding. Procurement of the SAT equipment was delayed due to difficulties in getting the first procurement approved by the MA/JS. There were uncertainties about which procurement method should be used due to the overall size of the investment, whether bid-at-three, national open procurement or EU-wide procurement.  Public procurement legislation in Sweden is only for authorities not intended for private companies and therefore it is essentially not possible for private companies to comply with the legislation. After consultations with various agencies, it was still unclear about what rules applied in Sweden.

Find a more detailed report on the WP3 page.